Yet another consequence of central planning: systemic sexism 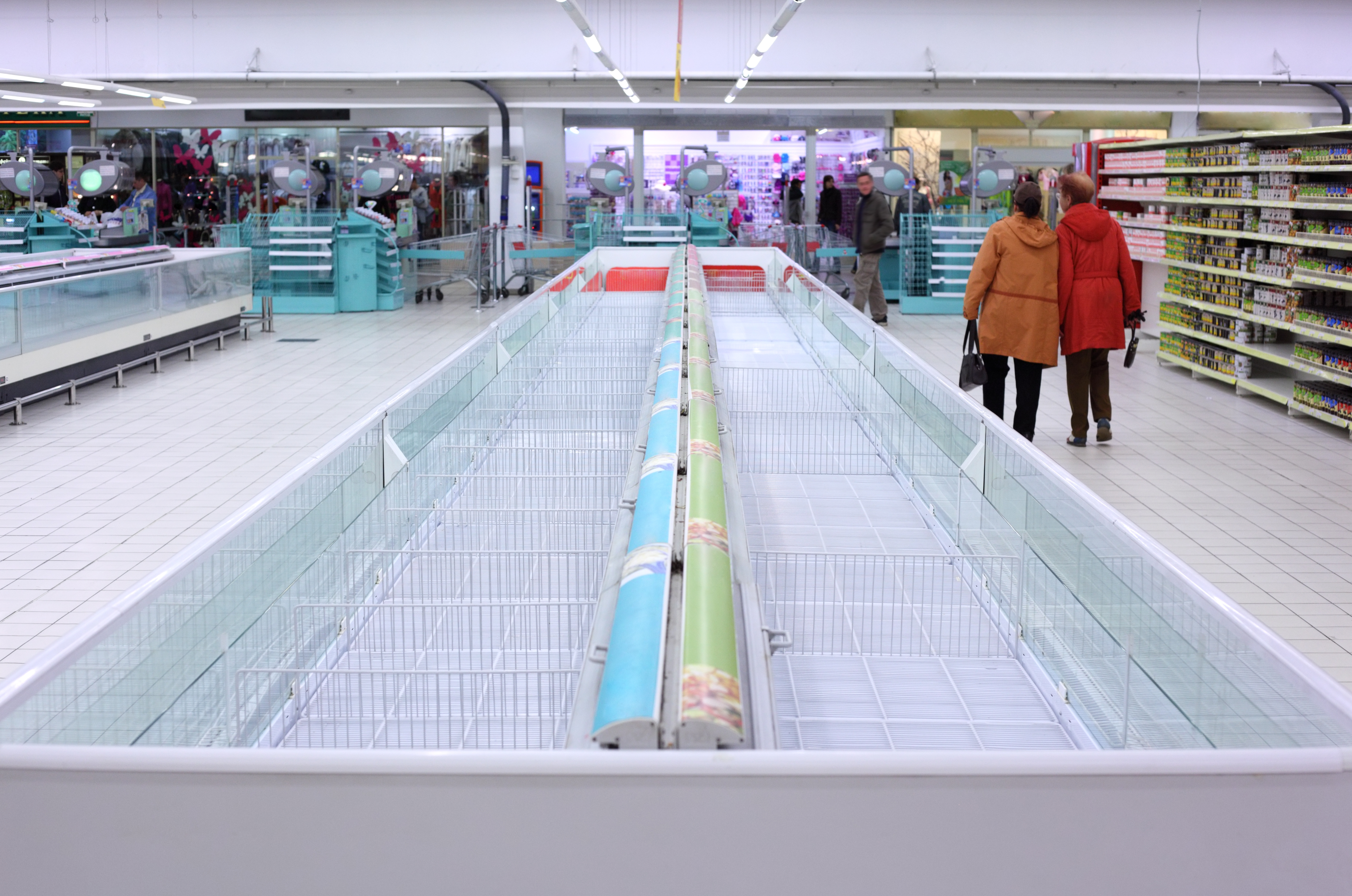 Chelsea Follett points out The Shocking Sexism of Central Planning in Human Progress back on 12/6/17. She reports on a book How We Survived Communism and Even Laughed which explains that central planners in the Soviet Union placed low priority on many products that women needed.

Oh, Frederick Engels considered housework unmanly, so the burden of no washing machine, dryers, or other time saving devices fell on women. Severe shortages of makeup, hair dye, and even sanitary napkins (yes, you read that right, basic hygiene was not a production priority in the worker’s paradise) made for a harsh life for women.

END_OF_DOCUMENT_TOKEN_TO_BE_REPLACED

By Jim Ulvog, 3 years ago

Oil platform in Venezuela. A view of what used to be and could have been now. Image courtesy of Adobe Stock.

8/31/17 – Wall Street Journal – “Hope Is Gone” as Venezuelan Protesters Vanish From Streets – The protests have faded away. The ongoing massive arrests, torture of detainees, widespread human-rights abuses, and frequent shootings seem to have broken the protest movement. A number of senior leaders of the opposition have fled the country in fear for their life. Reports indicate 125 people have been killed and somewhere around 2000 have been wounded, with many of those people with permanent injuries.

One outside observer, who is safe because he is an American living in the United States, observers the president has gained effective control of the entire government. I think if we look at the typical definitions that makes him a dictator.

In the meantime the oppressed people of the country continue to scramble for food, trying to find enough so they don’t starve to death.

9/22/17 – Miami Herald – In Venezuela, they were teachers and doctors. To buy food, they became prostitutes. – A large portion of the prostitutes in Columbia are women who escaped Venezuela. Before transitioning to the world’s oldest profession, many of them were teachers, doctors, professional women. One brothel even has a petroleum engineer.

END_OF_DOCUMENT_TOKEN_TO_BE_REPLACED

News out of Venezuela keeps getting worse.

8/18/17 – Wall Street Journal – Venezuela’s Former Attorney General Flees to Columbia – The constituent assembly removed the Attorney General earlier in the month and last week took over all legislative powers from the Congress. When the government leveled corruption accusations against the now-deposed Attorney General, she and her husband fled for their lives to Columbia.

As an indicator of why she had to get-outta’-Dodge is that the secret police raided her home last week and the government has now banned 60 other prosecutors from leaving the country.

A New York investment bank bought bonds from the Venezuelan central bank at a steep discount and got a lot of heat for doing so. The military is applying more violence to protesters as support from the rank and file appears to be shrinking.

5/30 – Wall Street Journal – Goldman Sachs Under Fire for Venezuela Bond Deal – Goldman bought $2.8B of bonds issued by the government-owned oil company for $865M. That is 31% of face. If, and this is a big if, the bonds were to be paid in full, on-time, at face value that would produce a 40% return.

Goldman is in a PR mess because the bonds were held by the Venezuelan central bank, meaning Goldman essentially put almost a billion dollars into the government’s hand.

Article says Goldman has been increasing their holdings of Venezuelan debt over the last few months. Their play is that if government gets its finances in order, the bonds will soar in value and Goldman will make a huge profit.

END_OF_DOCUMENT_TOKEN_TO_BE_REPLACED

Why, oh why, did production of oil and food collapse in Venezuela? What could have caused this amount of human suffering?

Devastation in the oil industry and food supply chain in Venezuela is due to intentional government policies.

One article sees how the government caused the damage to the oil industry while another article sees the devastation in the food supply but cannot see any direct cause.

5/7/17 – Forbes – How Venezuela Ruined Its Oil Industry – Here is a primer on how to destroy your oil industry when you have the world’s largest proven reserves of oil and are in the top 10 of world oil producers.

If you want to destroy your country, the article provides a how-to-guide, using Venezuela as the road map.

The high point of oil production in Venezuela was 3.5M bopd back in 1998, which not by coincidence was the year Hugo Chavez became president. Production then began to slip. How could that be?

After civil unrest in 2002 and 2003, Chavez fired much of the staff of the national oil company, letting go 19,000 experienced staff.

Let me translate that: 19,000 staff who knew how to produce extra-heavy oil were fired and replaced by people whose primary job skill was loyalty to the president.

Extra heavy oil takes specialized knowledge and is very expensive to produce on top of oil production already being capital-intensive.

To generate more revenue, Venezuela invited five of the oil majors to develop more oil production. The form of investment was a partnership. The five majors invested many billions of dollars in oil production.

END_OF_DOCUMENT_TOKEN_TO_BE_REPLACED

When do we get to call the ‘Maduro diet’ in Venezuela a crime against humanity?

In what used to be the regions’s richest country, the average weight loss in the last year is 19 pounds.

That’s an average weight loss according to a survey by social scientists measuring the impact Venezuelan government policies are having on the citizens of the country.

It is called the ‘Maduro diet’ in dishonor of the president who is gladly continuing the polices that have broken the once rich nation.

It is a common site to see people picking through trash hoping to find something that is edible.

When will those of us who don’t have to decide which of our children get to eat today start calling the expected results of intentional policies a crime against humanity?

Let’s take a quick look at health care in Venezuela before returning to the starvation issue.

Collapse of the health care system

The medical crisis is so bad that even CNN has noticed. On 5/11/17 they reported Amid chaos in Venezuela, infant deaths, malaria cases skyrocket.

The government released statistics for 2016. They reported:

END_OF_DOCUMENT_TOKEN_TO_BE_REPLACED

Now gasoline shortages in the country with the world’s largest amount of proven oil reserves. What economic system could possibly create this mess?

In Venezuela, that sign is needed at hospital pharmacies, bakeries, and now  at gasoline stations. Image Courtesy of Adobe Stock.

The shortages and suffering in Venezuela continues. Your homework for the day: what economic system provides this level of suffering?

(Cross-posted from my other blog, Outrun Change.)

3/13 – PanamPost – Venezuelan Regime Threatens to Expropriate bBakeries, Jeopardizing Bread – In addition to price controls and currency controls, the government is going to impose output requirements on bakeries. If they don’t produce bread all day at the government limited price, they are subject to take over by the government. Left out of their miscalculation is that the government has stopped importing wheat flour.

If bakeries don’t bake enough bread, the government will close the shops.

END_OF_DOCUMENT_TOKEN_TO_BE_REPLACED

Updates on continuing suffering in Venezuela – #20

Venezuela doesn’t have enough money to scrub down hulls of tankers so they can enter international waters. Image courtesy of Adobe Stock.

The suffering continues without a break. One of the more ominous articles describes that Venezuela is so short of currency that the national oil company cannot afford to scrub down the hull of oil tankers, which is required before they enter international waters – the country cannot even get the oil in those loaded tankers to market.

1/6 – Wall Street Journal – Venezuela Tees Up Its Next Dictator – The Venezuelan president faces a recall election this year. It looks like in anticipation of losing the election, a new vice president has been appointed. Under the country’s rules, if the president lost a recall before the end of 2016, there would have been a new election. If he is voted out after the first of 2017, the VP will take over.

The editorial points out the new VP will likely continue the present policies. He was previously a follower of the previous president. WSJ reporting indicates while the new VP was governor of a state, there were two Iranian companies (owned by the Iranian military) who had joint ventures with military in that state. More info in the editorial pointing to the new guy won’t be a change in direction.

Thus the opposition needs to decide which dictator they wish to rule them.